In the local paper this past weekend there was an article on the 400th anniversary of the King James Version Bible. The headline read “The Bible Turns 400”. What got my attention was the caption underneath it. It read “King James Version published May 2, 1611.” Where did the columnist get the date of May 2nd? I then Googled a bit and found this May 2nd date repeated over and over on virtually every site I went to.  I find this interesting because in all the books I’ve read on the history of the King James I have never seen a reference to May 2nd as the publication date. As a matter of fact, apart from the year no one really knows what date the King James was published on.

David Norton in his book A Textual History of the King James Bible says “The printing history of the KJB is plagued throughout by inadequate publishing records. Presumably because it was considered a revision rather than a new book, the first edition was not entered on the Stationers’ Registers, so we do not know when in 1611 it appeared.” (page 46)

Norton’s book was published in 2005 so I thought maybe some new evidence had surfaced which fixed the date to May 2nd.  I immediately thought of Donald Brake. After reading his first book, A Visual History of the English Bible, I had emailed him a couple of questions and he quickly provided me with answers. Since he just published a book specifically on the history of the King James Version (A Visual History of the King James Bible) I thought I would try him again. Two days later came his reply. Here’s what he wrote:

“The actual date of the publication is unknown. Tradition has placed it in May but no specific date can be verified. We know it was being sold in November from a diary of a resident in England, a Mr. Throckmorton. I believe David Norton is correct and I too am puzzled by the fact it was not in Stationer’s Registers. They were generally disciplined to include all new publications. I question the reason ‘because it was considered a revision rather than a new book.’ While it was designed to be a revision of the Bishops’ Bible as clearly stated in the Introduction, few would consider it an actual revision of the Bishops’. The translators consulted most of the 16th century Bibles (as set forth in the 15 rules for translators) plus the Greek and Hebrew texts. Having said that, I don’t have a better explanation. Perhaps it was released over a period of time as the copies were sold.”

As it turns out Brake was in DC during May 2nd and 3rd for a celebration of the KJV anniversary. The date, he said, was a “date the anniversary committee decided as the official day.”

I have no problem celebrating the anniversary on May 2nd. Since we don’t know the date we may as well pick one. What bothered me was how so many articles identified May 2nd as the date as if it were an established fact. Not a single source that I read said anything like “While no one knows the exact date of the publication of the King James Bible modern scholars have selected May 2nd as the date to honor the anniversary.” (There’s probably one out there. I just didn’t see it.) Is that asking so much?

Many thanks to Don Brake for taking time out from his busy schedule to answer my email. 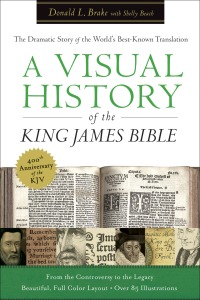