The Christmas commercials are in full swing. We have two radio stations that are playing Christmas music 24 hours. In true retail fashion we have rolled out the Christmas cards, decorations and of course the nativity sets. The traditional nativity has become a staple in American culture. But according to some scholars those nativities aren’t anywhere close to picturing the original Christmas story. R.T. France in his commentary on Luke offers the following comments Luke 2:7 (his comments rely heavily on Kenneth Bailey’s book Jesus Through Middle Eastern Eyes):

“there was no guest room available for them. The Greek word traditionally translated ‘inn’ (katalyma) normally denotes a guest room in a private house (as in 22:11); Luke uses a different word for a commercial inn in 10:34, and it is questionable whether Bethlehem was a large enough settlement to have an ‘inn’ as such. A slightly more affluent village home might have an additional room for guests either alongside the main living room or built on a roof (cf. 2 Kings 4:10). Perhaps it was already occupied by other relatives who were in town for the census. So Jesus was born among the family in the living room. The circumstances were humble and perhaps inconvenient in contrast to an emperor’s palace, but the scene is one of warmth and acceptance in a family home, not of rejection and squalor.” (33-34)

He further comments on the term “manger.”

“Luke’s mention of a ‘manger’ has led most Western readers to assume that Jesus was born in a stable, and that idea has become fixed in our Christmas traditions, even though Luke does not speak of a ‘stable.’ Rather, an ordinary Palestinian village home was a one-room house in which animals were kept on a lower level (not in a stable), with the mangers along the side of the family’s living area. The manger was therefore part of an ordinary living room, and there is no basis in Luke’s account for the sentimental idea that Jesus was born excluded from human society. Since Bethlehem was Joseph’s ancestral home, we may assume that they were staying with relatives.” (32-33)

Bailey also makes this observation which was a corrective for my thinking.

“Joseph had time to make adequate adjustments. Luke 2:4 says that Joseph and Mary ‘went up from Galilee to Judea,’ and verse 6 states, ‘while they were there, the days were accomplished that she should be delivered’ (KJV, italics added). The average Christian thinks that Jesus was born the same night the holy family arrived—hence Joseph’s haste and willingness to accept any shelter, even the shelter of a stable. Traditional Christmas pageants reinforce this idea year after year.” (Jesus Through Middle Eastern Eyes, 26)

The diagram below is a nice represention of what a house may have looked like. 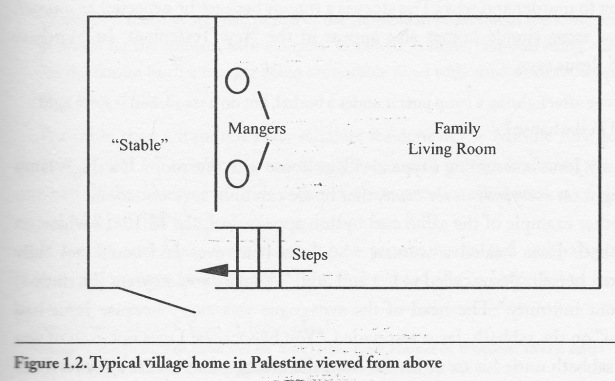