One thing I love about my job is seeing the used books come in. Every now and then a book I’ve only read about and has interested me shows up. This past week we got in a copy of Ben Witherington’s book The Problem with Evangelical Theology (Baylor University Press). I’ve seen this referenced in some other books and I’ve always enjoyed Witherington as a writer. The book deals with three systems of theology: Calvinism, Dispensationalism and Wesleyanism. As a Wesleyan Witherington believes that the Arminian approach to biblical texts has “fewer weaknesses” than in other systems. But he says that he has “spent too much time exegeting the NT as a whole not to realize that there are exegetical weaknesses in the Wesleyan way of reading the NT.” (171) This kind of honesty has always impressed me about his scholarship. I haven’t had much time with the book but I wanted to at least peruse its pages and as I did I ran across these seven points he makes with regard to Dispensationalism. I found point four especially interesting.

1)      To take apocalyptic prophecy literally is to violate the character of such prophecy which, while referential, is also highly metaphorical and imagaic.

2)      To strip either regular oracles or apocalyptic prophecies out of their historical contexts and to fail to realize that much of this material has already been fulfilled in generations gone by is a major mistake.

3)      Even when one is dealing with prophetic material in Revelation that focuses on events which are still outstanding, such as the second coming of Christ, it is critical to bear in mind the OT and NT writers were not writing with later Western Christians in mind. We must enter their world. They are not speaking directly in our language.

4)      Careful exegesis will show even in Revelation judgment is not ever exercised by anyone other than divine agents—Jesus or his angels or those who come with him from heaven. There will be no Armageddon between human armies. There will be no rebuilding of the temple in Jerusalem by human forces; all divine solutions to the human dilemma descend from above. They do not have to do with human machinations, invasions, and plans. Neither America nor any other nation is depicted as dealing with the antichrist. Only the Rider on the White Horse can do that. One should not look to the modern secular state of Israel as some sort of fulfillment of biblical Israel. Not even orthodox Jews in Israel see the current government in Israel as biblical!

5)      At no point in biblical prophecy, either Jewish or Christian, are there envisioned two separate peoples of God to who differing groups of prophecy apply. Always the people of God is either Jews with Gentile adherents united in Israel or, in the later Christian schema, Jew and Gentile united in Christ.

6)      From a Christian point of view, all OT promises and prophecies are to be fulfilled in or by Christ, not apart from Christ and/or the church.

7)      In terms of what Dispensationalism gets right, it is true that some of this biblical prophecy is predictive, and some of it is eschatological in character and has not yet come to pass. It is often, however, not as particularistic in character as Dispensationalism interpreters might like. Perhaps this is because God only reveals enough of the future to give us hope, but not so much that we no longer need to exercise faith! (109) 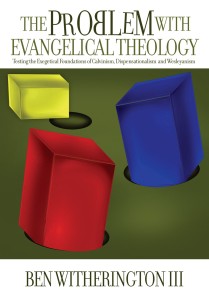 Here’s the table of contents:

Overture: The Legacy of the Reformers

PART ONE. Augustine’s Children: The Problems with Reformed Theology

2 Squinting at the Pauline “I” Chart

3 Laying Down the Law with Luther

PART TWO. On Dispensing with Dispensationalism

5 Enraptured but not Uplifted: The Origins of Dispensationalism and Prophecy

6 What Goes Up, Must Come Down: The Problem with Rapture Theology

7 Will the Real Israel of God Please Stand Up?

8 Jesus, Paul, and John: Keeping Company in the Kingdom

PART FOUR. The Long Journey Home-Where Do We Go from Here?

12 And So?
Coda: Rebirth of Orthodoxy or Return to Fundamentalism?